Omschrijving - In the post-war austerity period, the Bond practical, motorcycle-engined, three-wheeler Minicar gave tens of thousands of people affordable personal transport at a time when conventional vehicles were beyond the reach of the average household.
Yet whilst the later, mostly imported, 'Bubble cars' have remained in the public eye, it is largely forgotten that the first of the post-war 'Microcars' to go into significant production was the British designed and built Bond.
Equally enigmatic seems to be the designer of this vehicle, Lawrence 'Lawrie' Bond a prolific automotive design genius, with a penchant for weight-saving construction techniques.

He was responsible for a wide range of two, three and four wheel vehicles; from ultra-lightweight motorcycles and scooters, such as the Minibyke, Lilliput and Gazelle, as well as his other Microcars the stylish Berkeley and perhaps less-than-pretty Opperman Unicar and finally to his later work, including the innovative, but troubled Bond 875 and styling the Equipe GT sportscar.

Here the story is told in full, covering all Lawrie's innovative designs and the various vehicles that bore his name, all in prolifically illustrated detail, together with his passion for motor racing, which resulted in a number of technically acclaimed racing cars, some of which can still be seen competing is historic racing events today. 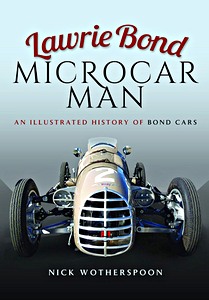 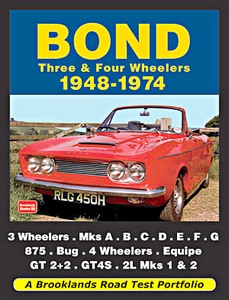 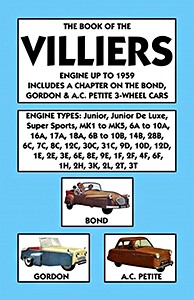 The Book of the Villiers Engine (up to 1959) - Includes a Chapter on the Bond, Gordon & AC Petite 3-Wheel Cars