The authors have been involved in the old bike hobby for decades and have been collecting information on every British marque over all that time.

This book is a culmination of their efforts and is a comprehensive directory of British motorcycle manufacturers and their products. Each entry contains a summary history of the manufacturer and its most important machines, and where possible entries are illustrated. There are over 850 illustrations in total. 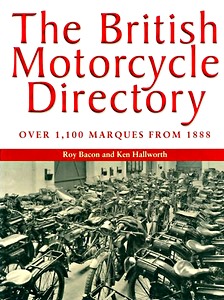 Rinsey Mills provides A-Z coverage of British motorcycle manufacturers and their products during the 20 years following World War II. This was a time when the British industry was at the top of its game, exporting all round the world and producing everything from humble ride-to-work two-strokes, to fire-breathing projectiles like the magnificent 1000cc Vincent Black Shadow. 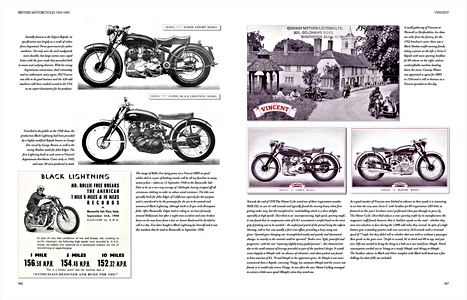 From the forgotten Aberdale, of Llwynypia, Wales, to the ingeniously eccentric Wooler, of north-west London, here is alphabetical coverage - in no less than 600 pages - of British motorcycle makes of the period 1945-1965, among them great names such as AJS, BSA, Matchless, Norton, Royal Enfield, Triumph and Vincent.

There is a brief history of each maker, and detailed coverage of the various models they produced, using the original manufacturers' publicity material for the illustrations. 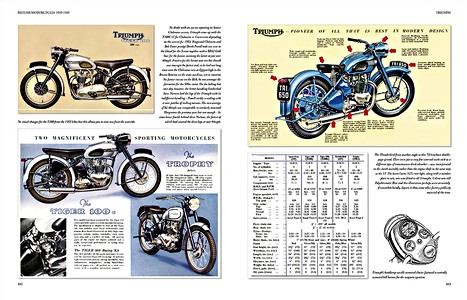 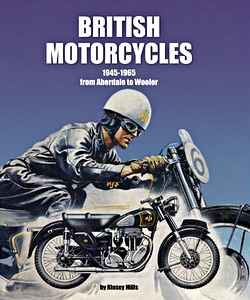 British Motorcycles of the 1940s and 50s

After VE Day in 1945 the British population returned enthusiastically to the road. But the cost and availability of both vehicles and fuel led to the post-war scene being dominated by motorcycles, most of them ex-military machines, eagerly snapped up for everyday use in an age when a family car remained just a dream for many. The British industry, meanwhile, was exhorted to 'export or die', and until well into the 1950s the majority of new British bikes were sold abroad.

During this period, the industry - the largest and most important in the world - continued to develop new and exciting machines. Mick Walker tells the story of the British post-war motorcycle during this golden age of the industry. With the help of archive photographs and advertising material, this book conjures up a lost age of the British bike, of journeys to work by popping two-strokes, and trips to the seaside in the family motorcycle combination. 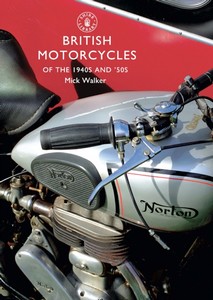 British Motorcycles of the 1940s and 50s

For the first half of the 20th century Great Britain led the world in motorcycle design and production, exporting its products to countries in every section of the globe. However, as the second half of the century began in 1960 this once great industry commenced what was to be a terminal decline.
During the 1960s and '70s Britain still manufactured a wide range of machines, but a combination of poor management, lack of investment, foreign competition (notably from Japan), and the arrival of the small, affordable car transpired to effectively sound the death knell of the British motorcycle by the end of the 1970s. 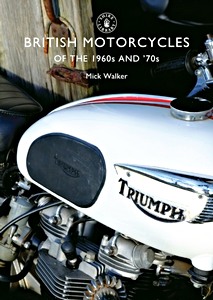 Published in the USA under the same title in 1951 by Floyd Clymer, the original publication was a pocket sized landscape format book and it is often criticized as difficult to read due to its small print size. Consequently, this edition was re-formatted into a larger and more conventional portrait size which has increased the text size by almost 40%.

This publication provides the reader with an insight into the country, and the manufacturers, that were ultimately destined to succumb to the dominance of the Japanese motorcycle industry. A total of 33 different British motorcycle manufacturers and their various models are included and sadly, less than a handful of those 33 manufacturers survive today.

A 'must have' resource for any motorcycle enthusiast and an invaluable reference for anyone interested in British 'iron'. Many of the motorcycles featured within are highly collectible today and the predominance of these early manufacturers no longer exist.
This truly historical documentation of the glory years of British motorcycle manufacturing has been out-of-print and unavailable for many years. We are pleased to be able to offer this reproduction as a service to all motorcycle enthusiasts worldwide. 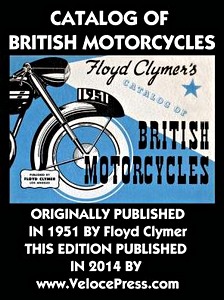 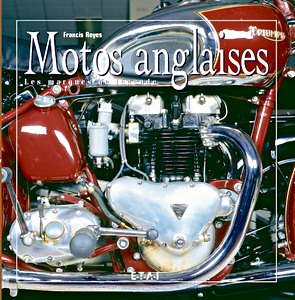 Until the 1950s, even into the 1960s, British motorcycle makers ruled the roost, names such as Scott, Rudge, BSA, Norton and the mighty Triumph. There were many others now remembered by enthusiasts. Yet these were the companies which developed the motorbike from its earliest beginnings as little more than a bicycle with a tiny engine and made it the fast, powerful and exciting machine we recognise today.
This is the story of those British machines and their development, even the story of some who rode them. Within this story may perhaps be discerned some of the reasons for their demise, but this is primarily a story of success. 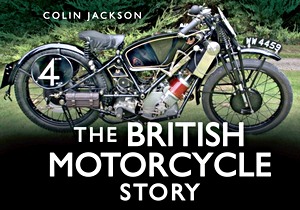 In the 1950s and '60s the British motorcycle industry was at its postwar peak, with its large-capacity high-performance bikes in strong demand all over the world.
AJS/Matchless, BSA, Norton, Royal Enfield and Triumph were all making 100mph-plus big twins, with the king of them all, at least into the 1950s, being the mighty1000cc Vincents, while among the ton-up singles were the BSA Gold Star and the Velocette Venom and Thruxton.

In this book veteran motorcycle writer Steve Wilson reviews the top-of-the-line bikes of all these manufacturers, first giving an introduction to the motorcycling scene in the period. Then the motorcycle makers are dealt with alphabetically, with their big bikes described in detail and their performance, handling, strengths and weaknesses discussed. 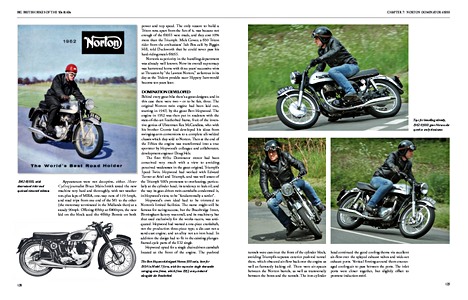 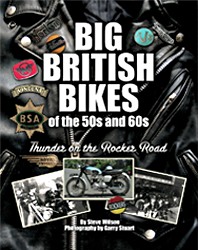 In 1952, Floyd Clymer published the first in a two-part series of motorcycle road test books that had originally appeared in the UK magazine, Motor Cycle. Obviously, these road tests focused on UK manufactured machines and European models that had UK distributors. The initial 1952 publication was followed by a second in 1954 that, in addition to motorcycle road tests, also included scooter, three wheeler and cyclemotor tests.
With 120 pages, profusely illustrated with 226 images plus specifications and performance information for each model, this publication combines both the 1952 and 1954 books into a single edition that includes 49 Motorcycle, 2 Scooter, 2 Three Wheeler and 7 Cyclemotor road tests.

The front cover of this book provides a detailed list of the machines featured in the individual road tests. However, the various manufacturers included are as follows. 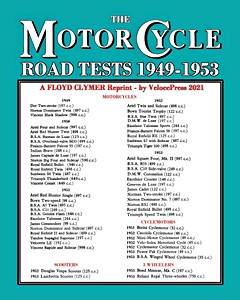 With foreign-built motorcycles generally dominating road and track today, it is perhaps difficult to appreciate that the situation was not always so. There was a time when virtually every manufacturer in Great Britain listed a racing machine in his catalogue and British machines dominated the scene.

Between the world wars, Norton, Rudge, Sunbeam, AJS and Velocette shared the spoils of victory despite the efforts of Italy, Germany, Sweden, France and Belgium. It was not until the mid 1930s that success began to come the way of the continentals, at first in the lightweight class, when Guzzi and Benelli from Italy appeared in the list of winners, along with Germany's DKW.

For many years after her decline as a force in world motorcycle manufacturing, Britain (and the Commonwealth) continued to provide great riders; Surtees, Hocking, Hailwood, Read and Sheene, to name but a few. 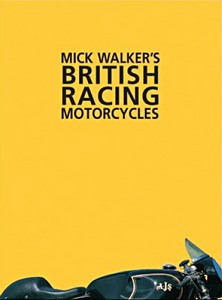 From 1946 up to 1959, the 250cc class in Britain was supported almost entirely by privately built Specials and Hybrids.
This book recalls the men and machines involved, and traces their history and development, in what was clearly the most technically innovative class of Road Racing in the 1950s.

Coventry was the birthplace of the British cycle industry and the city became heavily involved in the development of the British motor industry during the mid-1890s. From the first velocipedes built here in 1868, most of the later well-established cycle manufacturers quickly turned their attention to motorized vehicles, and many of the early motoring pioneers moved to Coventry to become part of this revolutionary work. Local companies such as Bayliss, Thomas & Co., Coventry Eagle, Humber, Riley, and Swift were just a few of the cycle firms quick to catch on, and steadily new companies were formed solely to manufacture motorcycles.

This book covers the history of all these companies and their products, focusing on the individuals who both founded and worked for such firms. From world-famous companies like Triumph, to the more obscure marques like Wartnaby and Draper, it provides a brief summary of each manufacturer, as well as an insight into the social history of Coventry at the peak of its involvement in motorcycle history. 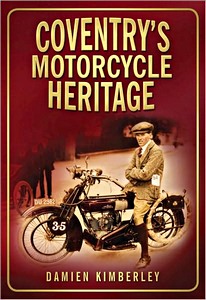 Many books have been written about British bikes and their racing history, but no one has devoted an entire book solely to the British-only custom motorcycle, and its chopper, cruiser, bobber and trike scene ... until now.

This book takes a look at some of the fantastic British motorcycle-based custom bikes around the globe. From the old to the new, it shows that when it comes to customising British bikes, things go much further than the simple chopped Triumph parallel twin. A celebration of all things 'custom Brit,' it is the only book devoted entirely to the British custom motorcycle, revealing the innovative, fresh approach to British-based custom bike building. 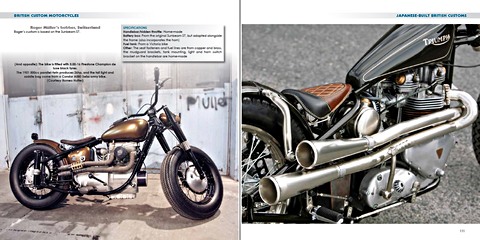 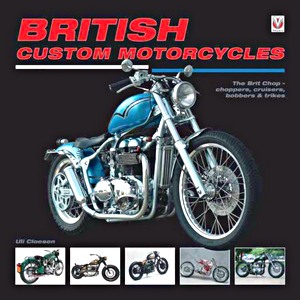 Plenty of books have been published about British bikes and their glorious motorcycling racing heritage, but until now none has solely focused on the rich variety of British café racers a genre created in 1950s Britain by the 'ton-up boys'.

Style, speed and passion combine for an eclectic journey into the world of the British café racer. Uli Cloesen's latest book - the first dedicated to the British café racer scene - is a celebration of all things fast from Britain, a definitive overview of the caféd British motorcycle, from single-cylinder to four-cylinder variants, and going well beyond the parallel Triton twin.

Featuring a truly stunning variety of British motorcycle engine based café racers, from the UK and beyond, and complemented by owners' stories and technical descriptions, this book presents the eye candy of the British café racer world ... come and see the caféd side of Britain! 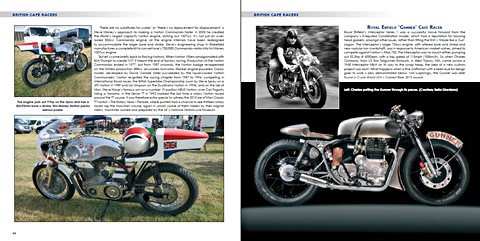 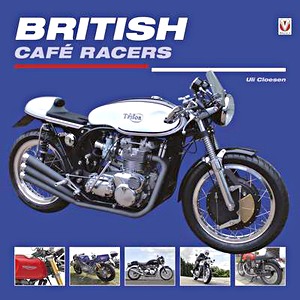 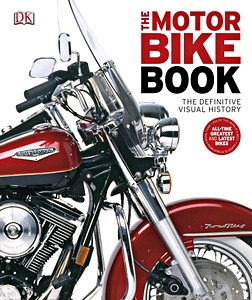 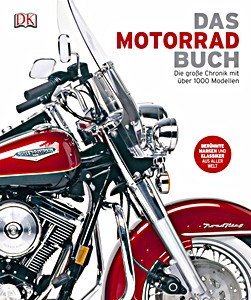 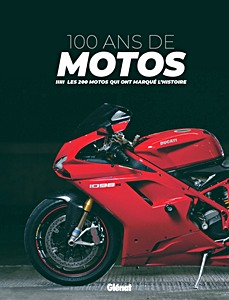 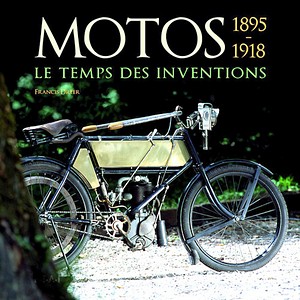 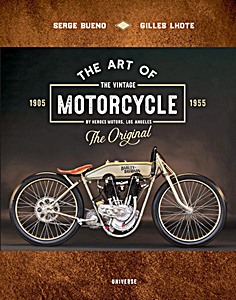 The Art of the Vintage Motorcycle 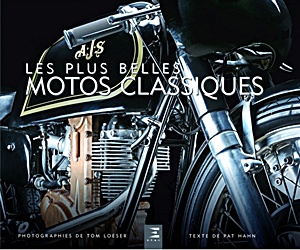 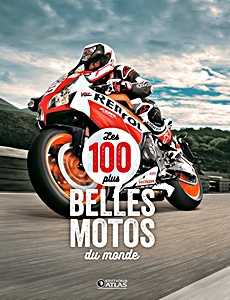 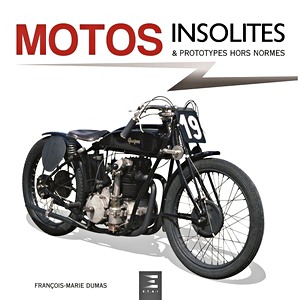