At the outbreak of World War II in September 1939, Germany's armoured forces - the Panzerwaffe - were still in their infancy. The restrictions imposed by the Treaty of Versailles meant that German tank production lagged behind its enemies. Initial armour campaigns in Poland were not overly successful and changes were needed before the invasion of France.
This book examines the organizational changes, developments in doctrine and tactics and improved command and control that provided the basis for the spectacular success of the Panzer divisions in 1940.

Achieving tactical and operational surprise, the Panzer divisions broke through enemy defences, enveloping a large number of hostile forces at Dunkirk. The legend of the Blitzkrieg was born.
This book examines the organizational changes, developments in doctrine and tactics and improved command and control that provided the basis for the success of the Panzer divisions in 1940. 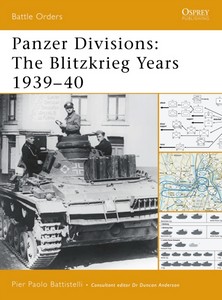 On 22 June 1941 Germany attacked the Soviet Union and her Panzer divisions were to play a major role in this titanic struggle. Although overwhelmed by Soviet numbers, the superior skill and capability of the German Panzer divisions meant that in three months the Germans had advanced deep into Soviet territory. However, after these initial successes the German offensive began to falter, culminating in the disastrous defeat at Kursk.

This book describes the organisational history of the Panzer divisions, from the early successes of 1941 through to the introduction of revised Blitzkrieg tactics as the war progressed. 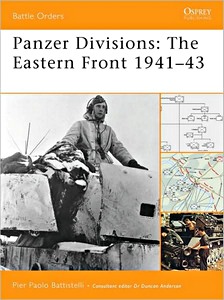 This volume provides a detailed examination on the late-war changes to the German Army Panzer forces and the formation of new units, from the collapse on the Eastern Front, through operations on the Western Front in Normandy and the Ardennes, to the final battle for Berlin in 1945.
The major organizational changes that took place in this intensive period are examined, together with the adaptation of German armoured doctrine, tactics, and the command. Details of unit histories and operations, illustrated in colour maps, are also provided in this packed treatment. 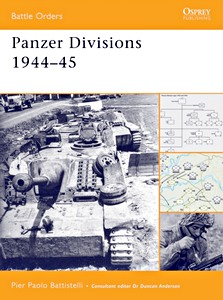 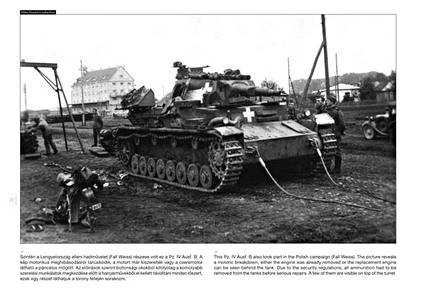 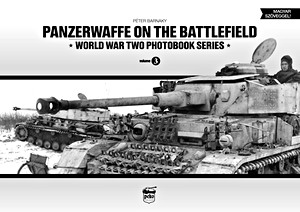 Panzer-Regiment 5 joined Erwin Rommel in North Africa and helped the Desert Fox win an impressive string of victories during 1941, but the regiment's-and Rommel's-most dazzling successes would come in 1942.
After ending 1941 in defensive positions, the Germans began the new year with an offensive that quickly captured Benghazi and then drove east toward the fortress of Tobruk. Destroying the Gazala Line, Rommel and his Panzers took Tobruk in June and continued their push into Egypt before being halted by the British at El Alamein in October.

By 1943, the African campaign had shifted west to Tunisia, where Panzer-Regiment 5 battled British and American tanks and participated in Rommel's last offensive at Medenine. Crippled by supply problems and Allied air superiority, the Germans surrendered in May 1943.

The remnants of Panzer-Regiment 5 were eventually reconstituted as Panzer-Abteilung 5, an assault gun unit, and sent to the Eastern Front to contend with Soviet T-34's. Increasingly outnumbered, the panzer men nevertheless fought bravely as German fortunes faded in 1944 and 1945.

Featuring scores of photographs and vivid firsthand accounts from members of the unit, the second volume of "Panzers in the Sand" picks up where the first left off and continues the combat history of Panzer-Regiment 5 and Panzer-Abteilung 5, from the sand and sun of North Africa to the bitter end near Berlin. 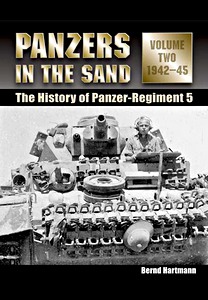 General Erhard Raus was one of the German Army's finest panzer generals and a leading exponent of blitzkrieg in the east.
German panzers were witnesses to the incredible onslaught that was the first few months of Barbarossa, then the gradual strengthening of Russian resistance, counterattack and, ultimately, the long and drawn-out German retreat. Raus and his panzers were tested in every conceivable tactical situation and, inevitably, Raus became highly versed in all aspects of mobilised warfare.

This account by Erhard Raus, edited by leading Eastern Front expert Peter G. Tsouras, concentrates on German efforts to relieve Stalingrad. Raus, as commander of 6th Panzer Division, was in the thick of this bitter action, urging his panzers forward in a massive effort to break the Soviet strangle-hold.
These journals were orginally written to brief the US Army at the height of the Cold War. 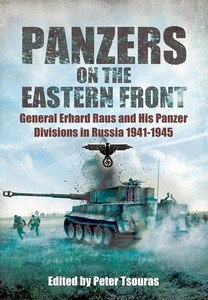 Panzers in the Defence of Festung Posen 1945

This book describes the bitter battle for Festung Poznan in 1945. That Polish city, occupied by the Nazis since almost the very beginning of the Second World War in 1939, was declared a fortress (Festung) on January 20 1945, and for the whole month it saw heavy fighting between Wehrmacht and Waffen SS troops and the Red Army advancing directly towards Berlin.
Among the garrison of the fortress a special part was played by a small heavy Panzer unit which possessed just 1 Tiger tank, 2 Panthers, 1 Panzer IV and a handful of Sturmgeschütze.

Despite the difficulty and sparsity of sources, the authors were able to acquire an impressive wealth of information and memoirs, as well as rich iconography.
This is the first book in English that allows the reader to follow the street fighting in Poznan through the eyes of the Wehrmacht soldiers, documenting the story of the German armoured forces engaged in the battles for the city. 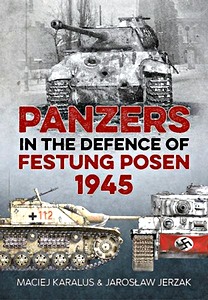 Panzers in the Defence of Festung Posen 1945

The German armoured forces lost some 10,000 armoured fighting vehicles. Today there are very few surviving vehicles from the Wehrmacht. We are fortunate therefore that these unique photographs detail the fate of the Panzers destroyed in action in the west. 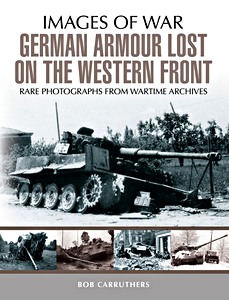 Rare photographs from both German and Russian sources. Today there are very few surviving vehicles from the Wehrmacht, which illustrates the fate of many of the armoured fighting vehicles of Hitler's much vaunted Panzerwaffe. 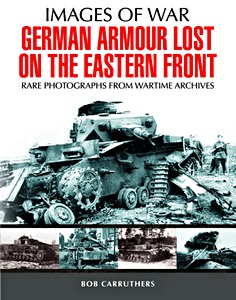 Using previously unpublished photographs, many of which have come from the albums of individuals who took part in the war, "Hitler's Panzers" presents a unique visual account of Germany at arms.
The book analyses the development of the Panzer and shows how it became Hitler's supreme weapon. It describes how the Germans carefully built up their assault forces utilizing all available reserves and resources and making them into effective killing machine.

From the Panzerkampfwagen.1 to the most powerful tank of the Second World War, the Jagdtiger, the volume depicts how these machines were adapted and up-gunned to face the ever-increasing enemy threat.

"Hitler's Panzers" is a unique sight into the full workings of the various light tanks, main battle tanks, self-propelled assault guns and tank destroyers. It is a vivid and fully illustrated account of the development and deployment of the German tank and brings together a captivating glimpse at the cutting edge of World War Two military technology. 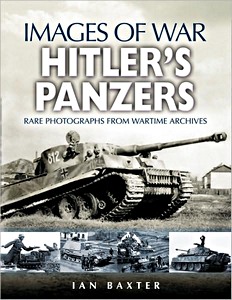 Armoured Warfare and the Waffen-SS 1944-1945 : Rare Photographs from Wartime Archives (Images of War)

Over 150 wartime photographs give a graphic snapshot of the dramatic tank battles fought by the Waffen-SS panzer and panzergrenadier divisions during 1944-5 on both the Eastern and Western fronts.
By this stage of the Second World War these formations were at the height of their powers and took part in major armoured operations in Russia, France, the Netherlands, and Poland.

As the Wehrmacht retreated the Waffen-SS played an increasingly important role. Most notably their panzers prolonged the war by staving off defeat at Arnhem and Wolomin, stabilizing both the Western and Eastern fronts at critical points in the fighting.

The photographs and the accompanying narrative record the contrasting conditions they faced on each battlefront and the weapons and equipment they used, especially the armoured vehicles, including the Tiger and Panther tanks, which were among the best designs the Germans produced.

But they also record the crimes committed by members of the Waffen-SS against civilians and captured enemy soldiers during the series of brutal, often desperate operations mounted to stave off German defeat.
Anthony Tucker-Jones's photographic history is a fascinating introduction to these elite units during the final phase of the fighting in Europe. 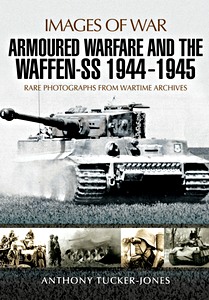 Armoured Warfare and the Waffen-SS 1944-1945 : Rare Photographs from Wartime Archives (Images of War) 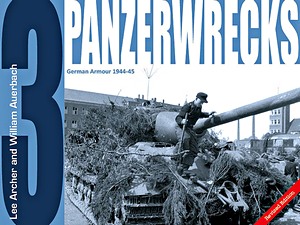 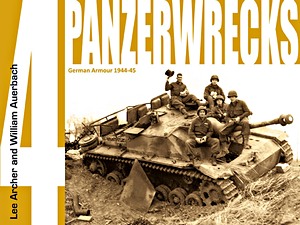 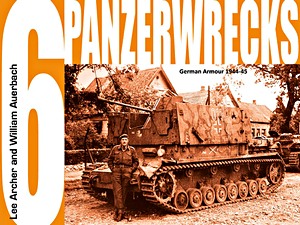 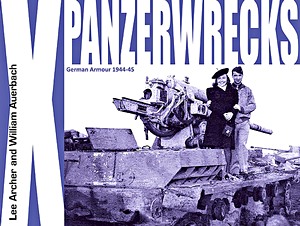 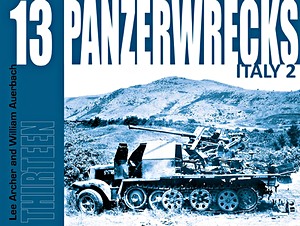 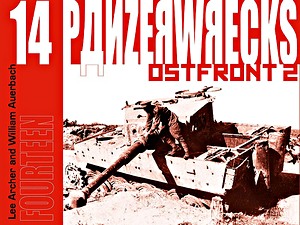 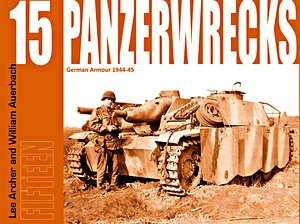