The tiny new state of the United Provinces of the Netherlands won its independence from the mighty Spanish empire by fighting and winning the Eighty Years' War, from 1568 and 1648. In this long conflict, warfare on water played a much bigger role in determining the ultimate victor.

On the high seas the fleet carved out a new empire, growing national income to such levels that it could continue the costly war for independence. Yet it was in coastal and inland waters that the most decisive battles were fought.
Arguably the most decisive Spanish siege (Leiden, 1574) was broken by a fleet sailing to the rescue across flooded polders, and the battle of Nieuwpoort in 1600, the largest successful invasion fleet before World War II, was one of the most decisive battle in western history.

Using detailed full colour artwork, this book shows how the Dutch navies fought worldwide in their war of independence, from Brazil to Indonesia, and from the Low Countries to Angola. 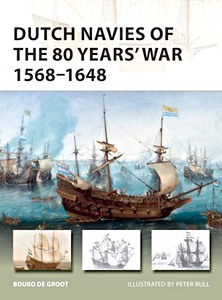 For most of the 17th century the Netherlands constituted the most important maritime power in the world, with by far the largest merchant fleet and a dominance in seaborne trade that other countries feared and envied. Born out of an 80-year struggle against Spain for independence, the Dutch republic relied on naval power to guarantee its freedom, promote its trade and defend its overseas colonies.
The Dutch navy was crucial to its survival and success, yet the ships that made up its fleets are among the least studied of any in the age of sail. The reasons for this include a decentralised administration of five separate admiralties, often producing ships of the same name at the same time, the widespread co-opting of merchantmen into naval fleets, and competing systems of measuring ships, all of which leads to confusion and error.

The most significant contribution of this book is to produce the first definitive listing of all Dutch fighting ships - whether purpose-built, purchased, hired or captured - from the heyday of the United Provinces, complete with technical details and summaries of their careers. It also provides an appreciation of the administrative, economic and technical background, and outlines the many campaigns fought by one of the most successful navies in history.
With its unique depth of information, this is a work of the utmost importance to every naval historian and general reader interested in the navies of the sailing era. 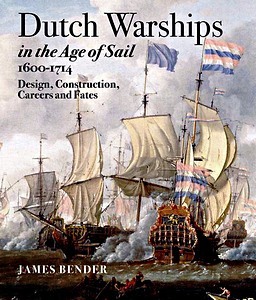 Three times during the 17th century, England and Holland went to war as part of an ongoing struggle for economic and naval supremacy. Primarily fought in the cold waters of the North Sea and the English Channel, the wars proved revolutionary in their impact upon warship design, armament, and naval tactics. During this time, the warship evolved into the true ship-of-the-line that would dominate naval warfare until the advent of steam power.

This book traces the development of these warships in the context of the three Anglo-Dutch wars. 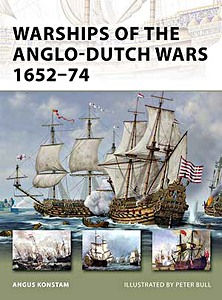 The daring raid on the Medway in June 1667, when the Dutch navigated the treacherous shoals and sandbanks of the Thames estuary and the Medway in order to attack King Charles's ships laid up below Chatham, was one of the worst defeats in the Royal Navys history, and a serious blow to the pride of the English crown.
Perhaps the greatest humiliation was the removal by the Dutch of the flagship Royal Charles, towed down river after the raid and taken back to Holland. Her stern piece resides in the Rijksmuseum in Amsterdam to this day.

The raid, intended to bring to an end English procrastination at the peace negotiations in Breda, was to cause simmering resentment and lead eventually to the Third Dutch War. As Pepys wrote in his diary on 29 July 1667, Thus in all things, in wisdom, courage, force, knowledge of our own streams, and success, the Dutch have the best of us, and do end the war with victory on their side.

P G Rogers account of the raid, and its significance within the Second Anglo-Dutch War between Britain and the United Provinces of the Netherlands, is vividly told and he sheds much interesting light on the English navy of Pepys's day.
His particular knowledge of the Medway and the topography of Gillingham and Chatham also enables him to describe the manoeuvres at a level of detail that has not been replicated. This edition of a classic work will delight a whole new generation of readers. 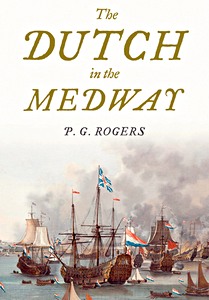 Protected cruiser (Pantserdekschip) HNLMS Gelderland was a Holland-class cruiser of the Royal Netherlands Navy. This class, of six ships, was considered a modest, but well thought-out design.
The ship was built at the shipyard Fijenoord in Rotterdam. Launched on 28 September 1898 it was commissioned on 15 July 1900. At a speed of 10 knots the radius of action would have been 8000 miles, the two triple expansion engines could give a top speed of 20 knots. 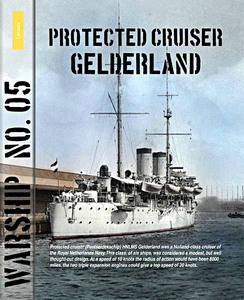 In the late 19th and early 20th century, a combination of coastal defence for the homeland and fleet defence for the East Indies became the established naval strategy for the Royal Dutch Navy and set the template for the world wars.
Battleships were too expensive to build and maintain, so after World War I, there was significant investment in submarine development and construction. A handful of modern light cruisers and a new class of destroyers were also constructed during the interwar years to serve as a small Fleet-in-Being in the East Indies, as well as to support the actions of the navy's submarines.
The light cruiser HNLMS De Ruyter and the Java-class light cruisers were the most powerful units of the new fleet whilst the backbone of the destroyer fleet was the Admiralen-class and the Tromp-class of destroyer leaders.

Beginning in December 1941, the Dutch Navy played a very active role in the defence of the East Indies against the Japanese during World War II. The Battle of the Java Sea at the end of February 1942 crushed Dutch naval power in the East Indies, sinking the cruisers Java and De Ruyter and killing Admiral Karel Doorman.
However, several Dutch surface warships and submarines continued the fight against the Axis powers alongside the Allies until the end of World War II, including a pair of British-built destroyers, Van Galen and Tjerk Hiddes.

This beautifully illustrated book from a leading scholar on Dutch military history provides a comprehensive guide to the Royal Netherlands Navy of the World War II period, complete with detailed cutaways and battleplates of the fleet in action. 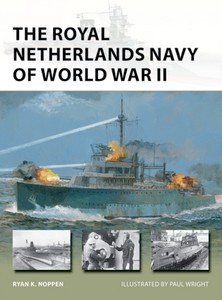 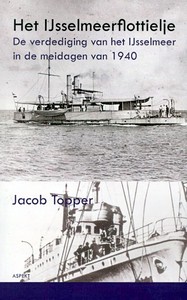 The battle of the Java Sea, fought in February 1942, was the first major surface engagement of the Pacific War and one of the few naval battles of the entire war fought to a decisive victory. It was the culminating point of the Japanese drive to occupy the Netherlands East Indies (NEI) and, to defend the territory, the Allies assembled a striking force comprised of Dutch, American, British and even an Australian ship, all under the command of a resolute Dutch admiral.
On 27 February 1942, the Allied striking force set course to intercept the Japanese invasion force in the Java Sea.

In one of the few such times during the whole of World War II a protracted surface engagement was fought unmolested by airpower. For over seven hours, the Allied force attempted to attack the Japanese invasion force, finally breaking off in the early evening.
Some three hours later, the Allied force, now reduced to just four remaining cruisers and two destroyers, attempted another attack on the invasion convoy during which Japanese torpedoes scored heavily, sinking two Dutch cruisers and bringing the battle to a conclusion.
Over the next two days, as the Allies attempted to flee, five more ships were sunk. From that point on, Allied naval power was eliminated from Southeast Asia.

In this illustrated title, Mark Stille tells the full story of the battle of the Java Sea, explaining how and why the Japanese achieved such a resounding victory, and delving into the tremendous impact of the battle on the course of the Pacific War. 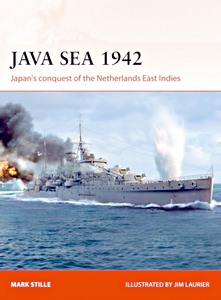 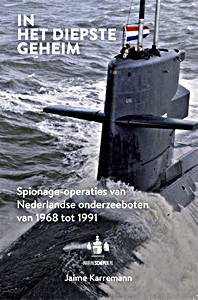 Trapped in the far east by the over-run of the Netherlands and by the occupancy of the Netherlands East Indies, Tromp's destiny lay in the Indian Ocean ans Pacific onslaughts. The ship became one of the highest decorated Dutch warships of World War 2.
Often refered as to as 'The Ghostship', the crew prefered to call her The Lucky ship. Because besides the British Ark Royal, there was no other ship more often claimed as to be sunk. 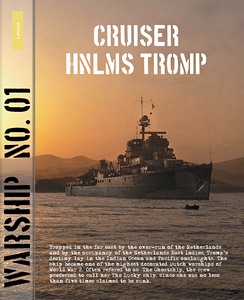 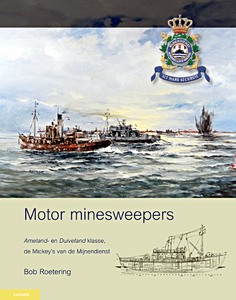 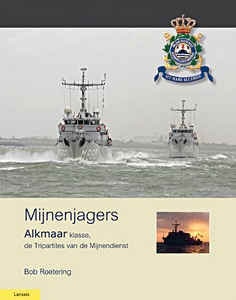 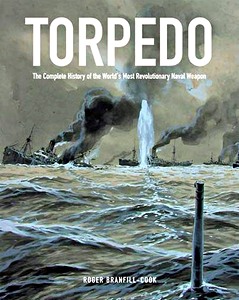 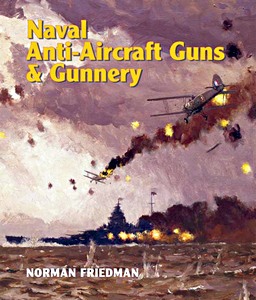