Of all the companies that built motor fire apparatus in America in the 20th century, none has acquired the cult-like following accorded the unique products of the Ahrens-Fox Fire Engine Company of Cincinnati, Ohio.
With its front-mounted piston pump surmounted by a gleaming spherical air chamber, the Ahrens-Fox piston pumper projects irresistible aesthetic and mechanical appeal. Fire apparatus aficionados and collectors have all but elevated the truly distinctive Ahrens-Fox piston pumper to a firefighting deity.

Noted fire apparatus historian and author Walt McCall has selected the best of the best for this photographic tribute to a legendary nameplate - including the milestone Continental, mighty six-piston Models PS, BT and what is arguably the most beautiful fire engine ever made in America, the classic, semi-streamlined Model HT.
A supplemental gallery of 32 color photos showcases some of the finest surviving Ahrens-Foxes. 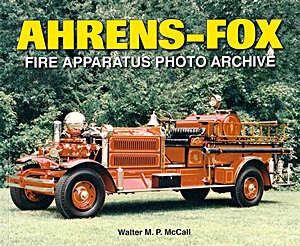 American Fire Apparatus produced a remarkable number of apparatus and was, for many years, an innovator and major force in the industry. View the complete line from beginning to the end including brush trucks, mini-pumpers, pumpers (both custom and commercial), tankers, snorkels, crash trucks, aerial ladders, and platforms. Informative text and captions include a company history as well as delivery schedules and original cost where available. City location index provided for easy referencing. 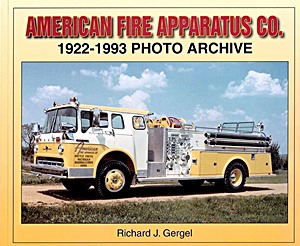 The diverse Food Machinery and Chemical Corporation, later named FMC Corporation, made chemical and agricultural equipment dating back to the late 1800s. The Bean Spray Pump Company was an FMC division, changed to the John Bean Mfg. Co. in 1915 and sometime in the late 1930s an orchard owner successfully used his dependable John Bean sprayer to extinguish a neighbor's house fire.

This accidental success story led to the development of the high pressure fog system which helped put out fires during WWII, and soon led to the first High Pressure Fog Fire Fighter body that could be put on any truck chassis. This success propelled John Bean to become one of the revered names in the fire apparatus industry through the post-war years until their slow weaning of the Bean name and eventual demise in the early 1990s.

Although primarily used by rural fire departments as an economical fire engine, many large cities even acquired FMC/Bean apparatus. Portrayed with historic black and white and contemporary colour images, this book covers the whole lineup from slide-in pumper and tank combos, to custom-built brush trucks, tankers, commercial and custom chassis pumpers, and even aerials, snorkels and ladder towers. 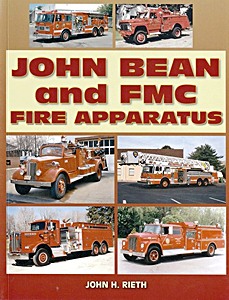 Follow the history of Crown Firecoach from its beginnings in 1951 until the company ceased building fire trucks in 1983. One of the pioneers of cab forward rigs, Crown's fire apparatus had a very distinctive appearance that collectors and restorers appreciate today.

Large-format photographs show a representative cross section of the full line of Crown, including pumpers, rear mount and tractor drawn aerials, snorkels, brush rigs and tractor transports.
While Crown rigs were sold primarily in Southern California, with Los Angeles being the company's largest customer, fire enthusiasts everywhere will want to own this important piece of fire apparatus history. 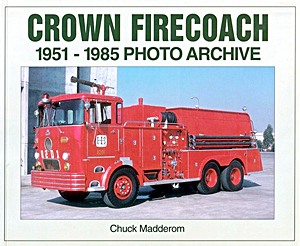 Unique in the fire apparatus industry, Darley is a family-run business that makes its own pumps and assembles complete apparatus. Follow the story of the Darley company from its beginnings as a municipal supply catalog company through the development of its first pumps and then complete fire apparatus up to the current day. 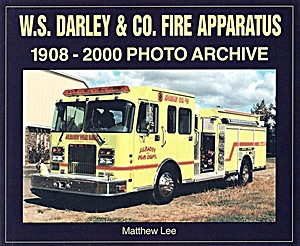 From an inconspicuous beginning in Ocala, Florida, in 1974, Emergency One rocketed to the front rank of the U.S. fire apparatus industry in less than a decade. E-One's astonishing rise stunned its long-established competitors and changed the way fire apparatus was constructed in the United States.
E-One's success was achieved by using pre-built interchangeable modules installed on any commercial truck chassis, and a complete fire truck could be ready in 30-60 days instead of the six months to a year needed by its competitors.

E-One's quick upstart allowed them to introduce their own custom cab-forward chassis in 1984, the Hurricane, which was also highly successful. Today, E-One remains the industry's second-largest player, behind rival Pierce. This book is packed full of colourful photos, and each chapter on various models covers the earliest rigs to today's beauties. 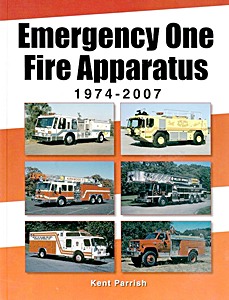 Grumman Allied Industries acquired Howe Fire Apparatus in 1976. The Grumman Emergency Products division built on the foundation laid by the legendary Howe and Oren names and soon became one of the largest and most well-known producers of fire apparatuses in the United States. Grumman introduced innovation and space-age technology to the fire apparatus industry in the short span of just 16 years.

This book highlights the wide range of pumpers, tankers, and aerials built by Grumman on commercial and custom chassis with model names such as the Minicat, Attackcat, Wildcat, Firecat, Aerialcat, and Panther. 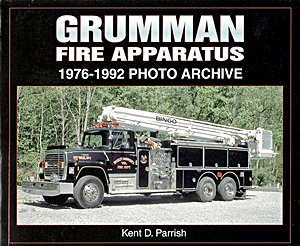 Hahn made a variety of apparatus, from tractor-drawn ladder trucks, to rear mounted aerials. Hahn's designs were very unique and identifiable. Very little has been published on Hahn in the past. This book uses previously unpublished photographs, many factory delivery shots, to document the story of Hahn from its inception to its demise. 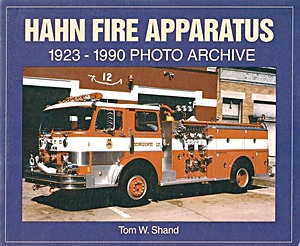 Imperial was unique in that within its first two years in existence it manufactured, sold and delivered a complete line of fire apparatus.
View the complete line including brush trucks, mini-pumpers, pumpers (both custom and commercial), tankers, snorkels and aerial ladders. Informative text and captions include a brief company history, as well as delivery schedules and cost where available. 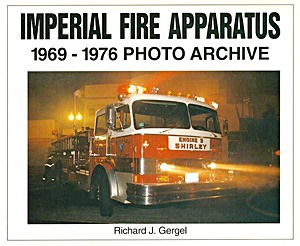 Little known and seldom seen! "Highly secretive" best describes this area of fire apparatus. The photographs included in this book are of individual rigs rarely seen since corporations do not welcome photographers and indeed discourage publicity concerning the rigs. 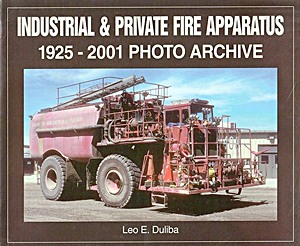 Follow the development of Maxim Motor Co.'s fire apparatus from the company's beginning in 1914 through numerous ownership changes and financial crises, up to its final days in the late 1980s.
Although many of the company records were lost or destroyed, the author has filled in the details of the rigs shown through meticulous research. 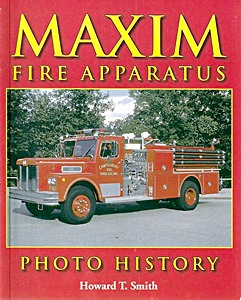 Oren Fire Apparatus manufacturing developed as an offshoot of The Roanoke Welding and Equipment Company, a Roanoke, Virginia, based family business founded in 1917, which specialized in welding, fabrication, automotive repair and specialty truck body building.
It was an easy complement to build some small-town light-duty pumpers. These were so well received that by the early 1940s fire engines became the company's principal products. Oren became a favorite of the fire service, and in advertisements proudly proclaimed itself The South's Only Fire Truck Manufacturer.

Carefully selected photos by noted historian Thomas L. Herman create a magnificent photographic history of Oren built rigs, from the early front mount pumpers to the more advanced body designs built on commercial chassis and the famous and awe inspiring custom rigs.
Also featured, in photos never before published, are the very first aerial ladder built by Oren and the very unusual one of a kind rigs. This volume will delight fire apparatus enthusiasts everywhere. 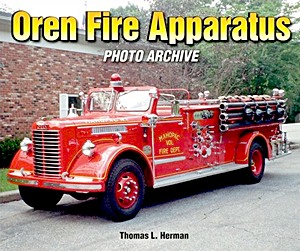 Founded by Dudley and Humphrey Pierce in 1913, the Auto Body Works, of Appleton, Wisconsin, became noted for producing custom utility bodies on commercial truck chassis. In 1939, the Auto Body Works began building fire apparatus bodies to supplement its business. The company would eventually assume the name of Pierce Manufacturing.
Propelled by an association with the famous Snorkel device and the introduction of products that would become fire service trends, Pierce became the new giant in the fire apparatus industry. Today, Pierce Manufacturing is a division of the Oshkosh Truck Corporation. 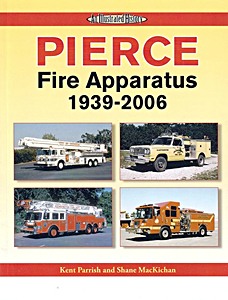 The first book published exclusively on fire trucks produced by the Pirsch company of Kenosha, Wisconsin. Best known for the invention of the world's first all-powered aerial ladder, the Pirsch company also produced a variety of fire trucks.
From hand-drawn ladder wagons in the 1800s to modern diesel-powered pumpers and aerial ladders, the factory produced thousands of trucks for fire departments, military and private fire brigades all over the world.

Contained in this book are photos of some of Pirsch's unique apparatus, including a pumper built to travel on railroad tracks and a huge smoke ejector built on a custom-built chassis. Factory photos show the different types of fire equipment and trucks produced on both custom and commercial chassis. 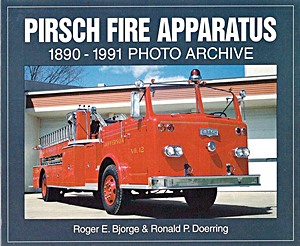 The classic Seagrave is timeless. Its distinctive waterfall grille is widely regarded as a high mark in the 20th Century American fire engine builder's unique art. If you're a fire apparatus enthusiast, you'll want to add this book to your collection. 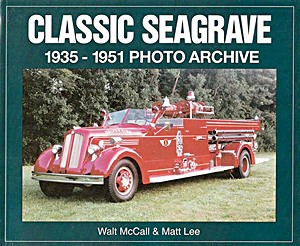 Pierre Thibault Ltd. was Canada's largest and best known manufacturer of fire engines. Throughout its history, Thibault built every type of fire apparatus imaginable - engines, ladders, platforms, rescues, and specialized units on both commercial and its own line of custom cabs and chassis. Hand-picked photos, with detailed captions, create a magnificent photo history of Thibault's fire apparatus that will appeal to all fire apparatus enthusiasts. 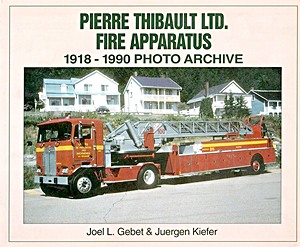 TASC (Trautwein And Sons Co.) made interesting use of sheet metal and graceful lines to produce some of the most stylish fire apparatus rigs. Now, take a photographic look at this small, New Jersey manufacturer of classic fire apparatus.

Photos depict the variety of chassis that were utilized by this builder. They show a progression from the mid-1940s through 1985 and from small commercial chassis to the final few custom units.
Today, many of the earlier units exist as parade pieces while some of the later rigs remain in service with various fire companies. Every fire apparatus buff will enjoy looking at these elegant rigs. 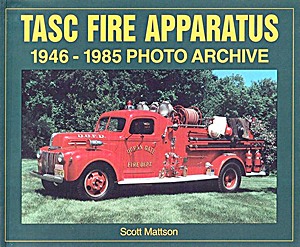 Van Pelt was the west coast fire apparatus builder that was in business the longest, from 1925-1987 and became the largest builder of fire apparatus west of the Rocky Mountains.
Van Pelt built all types including pumpers, water tenders (tankers), aerials, elevating platforms, brush engines, and more. See them all in highly detailed black and white photographs. Fire buffs will appreciate the in-depth coverage of this interesting company. 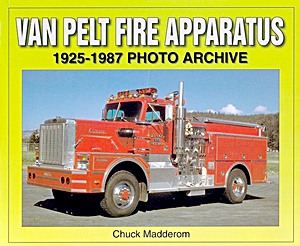 This is the first and only book on Young Fire Equipment, a previously unpublished area. Throughout its 60-year history, Young was in the forefront of fire apparatus innovation.
Both the fire service and fire apparatus historians have always recognized Young as a leader in design style and uniqueness. The company even produced three full-custom designs that were unique to the Young name. 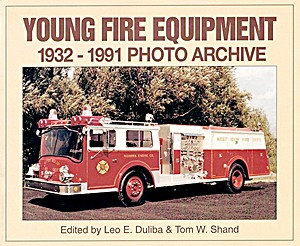 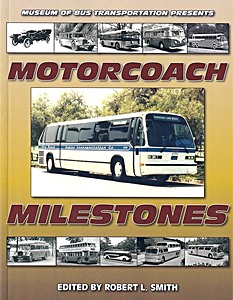 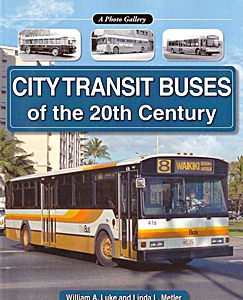 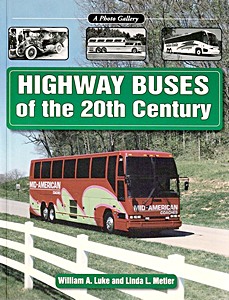 Highway Buses of the 20th Century 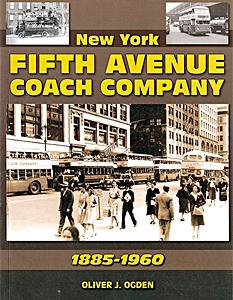 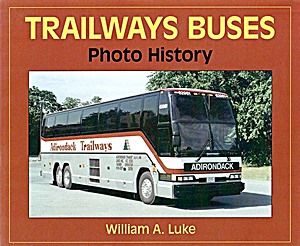 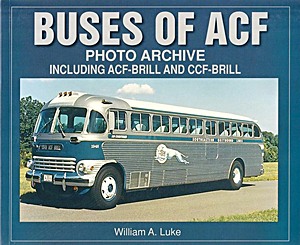 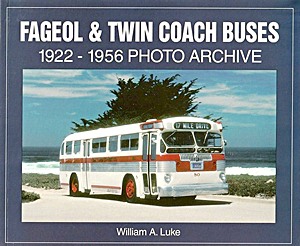 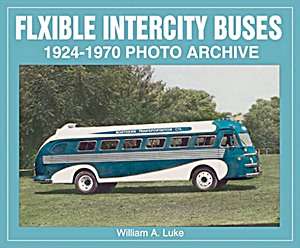